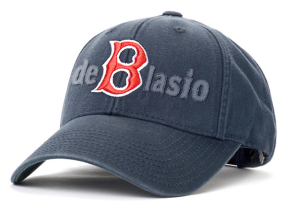 Someone just brought something to my attention that I find very disturbing. That mayoral candidate Bill De Blasio is a Boston Red Sox Fan. What? Really? Impossible. This must be some kind of joke. The man who’s leading in the polls and has a very good chance of leading New York City is a fan of the Red Sox?

What has this world come to?

Let me remind you what that means. October 2004, Bill De Blasio is stilling at home watching Curt Schilling take the mound for Game Six of the American League Championship Series versus the Yankees. And he’s rooting for Schilling. He’s sitting at home wearing his Jason Varitek jersey and going crazy when Kevin Millar scores.  He curses the Bambino when Bernie Williams hits a home run. And he laughs at Alex Rodriguez when he’s called out for interference. And when Tony Clark strikes out to end the game, he sits around with his Sam Adams Boston Lager and is thinking “Why Not Us?”

Do I have to ask if Bill owns a 2004 American League Champion Boston Red Sox t-shirt that was given to him by his buddies Johnny Damon and David Ortiz who both homered in Game 7? Was he the guy who made millions over the ‘reverse the curse’ t-shirts. Was that Bill sitting at the Stadium in a Red Sox hat laughing at Rudy Giuliani? Was he the guy who has a framed copy of the Daily News in his office? You know the one with the headline “The Chokes On Us?”  And this guy wants to be our Mayor?  Really?

Let’s rewind to 2007. You remember, Bill De Blasio screaming like a mad man as the Red Sox nipped the Yankees by 2 games to take the American League East. You remember Bill; he’s the guy laughing as the Red Sox swept Colorado in 4 straight games. I think he was probably the guy who made millions off the ‘Who’s Your Daddy Now” t-shirts.

We shouldn’t forget that as soon as the election is over, Bill is probably going to grow a beard just like every other Red Sox loving fan. And he’ll claim it’s for Mowvember to support a charity – but we’ll all know better. He’s growing it to support his favorite team. The Red Sox.

Now I don’t live in New York City. And I don’t get a vote. But I know plenty of you out there DO live in New York City and DO get to vote. So I’m starting a protest, right now. The Mayor of New York City can not – can never – ever be a Boston Red Sox fan. Imagine our mayor sitting in the Stadium wearing a ‘Come back Mo, we need another blown save” T-shirt. Imagine him laughing as Derek Jeter hobbles around shortstop next year. Imagine him cutting off funding for ticker tape parades when the Yankees win the World Series (again).

If he’s a Red Sox fan, does that mean he’s also a Patriots fan? A Bruin fan? A Celtics fan? Are we going to elect this guy? (And by we, I mean you.)

I could accept a Mets fan. I could even accept a Dodgers or Giants (baseball) fan – as they can claim some family heritage to the New York team.  But in the words of Taylor Swift – I can never ever, ever, ever accept a Red Sox fan.